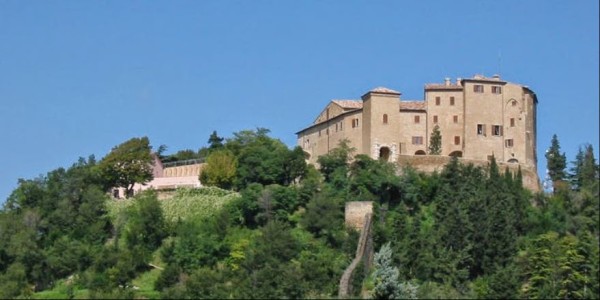 The 1st edition of the newly branded International Semantic Web Research Summer School (ISWS) was organised by STLab-ISTC National Research Council and Karlsruhe Institute of Technology at the University Residential Centre of Bertinoro between 1st and 7th July 2018. The Centre was located in Bertinoro, a small village on a scenic hill with a wonderful panoramic view. The school focused on diverse range of research areas including embeddings for knowledge graphs, natural language processing, ontology design patterns and Blockchain technology. The school saw an active participation by several members of KMi, including Prof. Enrico Motta was invited as the first keynote speaker at the summer school and Prof. John Domingue who attended the school as a tutor. Thiviyan Thanapalasingam (Research Assistant) and Prashant Khare (3rd year PhD student) participated in the summer school as registered students. 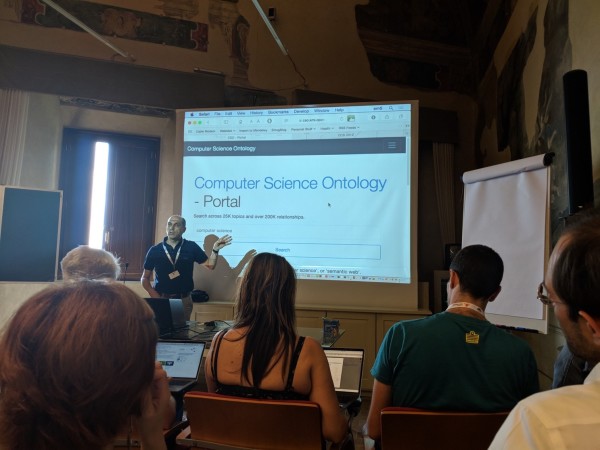 In his keynote speech, Enrico provided an overview of his research on scholarly data and smart city projects. The talk highlighted the research and the commercial outcomes of work undertaken by his research group. Enrico also gave motivational tips and advice to students who are pursuing a PhD in Semantic Web. John delivered two talks, a tutorial and an ‘In-Depth Pill’ session, that provided a very detailed vision of the significance and the potential impact of blockchain technologies for a decentralised Semantic Web. The talk elaborated on how various industries ranging from finance to academia could leverage Blockchain technologies to address and tackle wide range of issues. 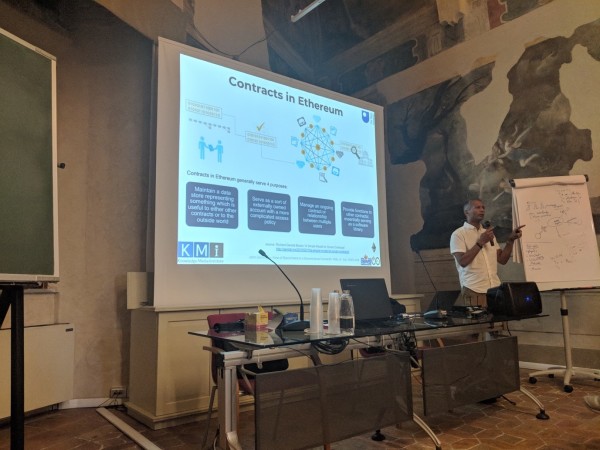 John Domingue presenting his tutorial on a Decentralised Semantic Web

The format of the school was oriented towards advancing student’s research abilities and was meant to provide the experience of working under tight deadlines to stimulate the life of a researcher. This year, the school was attended by 9 tutors and 60 students (selected from 113 applications) from around the world. At the beginning of the week, the students were divided into 9 Research Task Forces. Each Research Task Force consisted of 6 - 7 students and were led by a tutor.

A common research problem was assigned to all research task forces - Linked Data Validity – that is to support the assessment of the validity of a Linked Data statement. By the end of the week, each group was required to deliver a research report and a 10-minute presentation of their work. Each research task force, under the supervision of their mentor, conceived a solution to the research problem with a different perspective. The ideas spanned across relevancy in the data based on a domain to leveraging blockchain technologies on linked data. 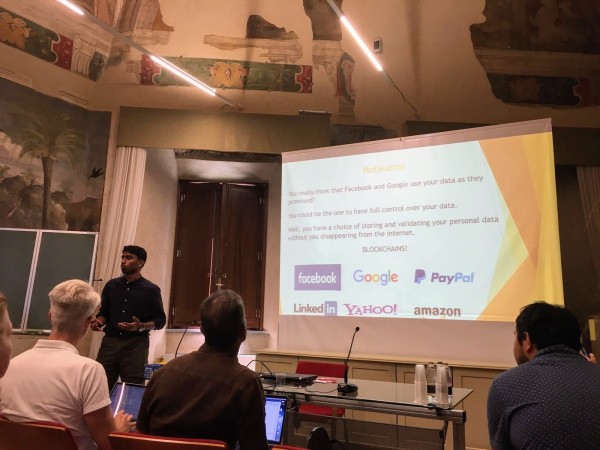 Thiviyan delivering the first part of the presentation for Hufflepuff.

KMi members contributed towards the success of two groups fetching three awards in total. Team 'Hufflepuff', which Thiviyan was a part of and John mentored, won the best prize awards in two categories - Best Research Report and Best Presentation. As part of their work, Huffpuff proposed a model for validating Linked Data on the Blockchain network and the team also presented potential use cases, such as career and relationship validation, where the model could be useful. Team 'Hobbits', which Prashant was a part of, won the 3rd prize in the Best Presentation category. Team Hobbits proposed an approach to determine the validity of linked data based on the contextual and spatial relevancy within a domain. 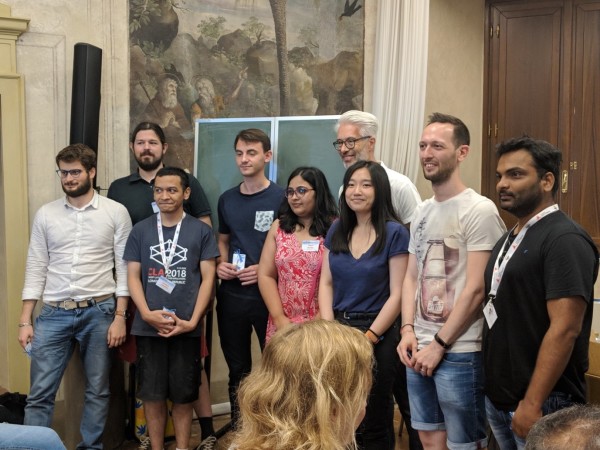 Prashant (first from right) and other members of the Hobbits collecting their award. 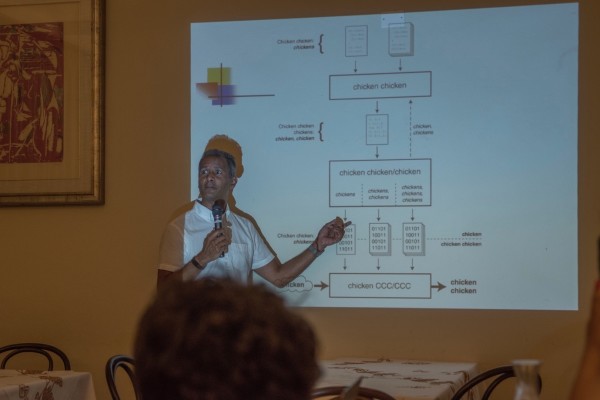 John participating in a game of slide karaoke.

The week, however, was not just about research methodologies and tight deadlines. The school organised social events, such as games, dinners and a trip around the historical city of Rimini. The students also realised their creativity skills by creating 1-minute videos which captured the funny side of being at a summer school. Overall, the students had an intense, engaging, learning, and fun filled stay of 6 days at the summer school. The school saw a great synergy generated from a blend of experience of the tutors and enthusiasm of the students.

Ettore Rizza, an Italian PhD student from Belgium, said that he “learned a lot here, and not just about technology.”

Tatiana Makhalova, a Russian student studying in France said: “It was a great experience that enhanced a wide range of skills: from hot-topic knowledge to team-working skills. Any research is not just about publishing results, it is the whole way from the idea to the completed project. I got an excellent insight on how to walk this path. Interesting and various lectures, outstanding tutors, talented participants -- they make a summer school a starting point for new researches and leave with participants much more than good memories”. Keynote and Special Track at eLmL 2020