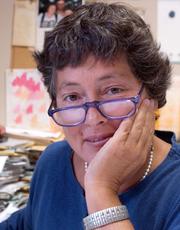 Abstracting patterns of civic online deliberation from field experiences and their evaluation.
This event took place on Tuesday 13 May 2014 at 11:30

Patterns have been proposed by Christopher Alexander (Alexander, 1977) as discernible regularities in the world or in a manmade design.Patterns are therefore a way for sharing knowledge, and reuse it.

After their application in computer science -- to share reusable software architectures addressing recurring programming situations (Gamma, Helm, Johnson, Vlissides, 1994) and describe solutions to common usability or accessibility problems in interaction design (Tidwell, 2010) -- Doug Schuler proposed patterns to share civic intelligence. Among the others presented in (Schuler, 2008), the Online Deliberation pattern addresses the following problem: “Current online systems don't provide the structure that groups of people engaging in deliberative meetings or discussions need to help them efficiently move through a decision making process that is accessible and ensures equal participation by all.”

In last years, my group – the Civic Informatics Laboratory funded in 1994 at the University of Milan and the RCM Foundation created from it  in 1998 – carried on several field online deliberation  initiatives, experimenting with different software platforms, including openDCN (Deliberative Community Networks) that is our own project, and LiquidFeedback (developed by the German Pirate Party). Recently we adopted Moodle, one of the mostly used open source LMS (Learning Management System), to manage an experimental online consultation on a bioethical issue.  We also analysed  similar initiatives recently carried on in Italy, by public institutions (some local municipalities which experimenting participatory budgeting; public consultations by the Monti’s and Letta’s Italian cabinet), by electoral coalitions and political movements, as the Five Star Movement, risen from the blog of the comic actor Beppe Grillo and come to be the second Italian political party (Sæbø et al., 2014). They use a variety of software, either open source, custom or proprietary.

In order to compare and share what these experiences teach, to identify good design choices, and to drive the design of future initiatives, we propose to systematize knowledge by identifying some more detailed Online Deliberation patterns which capture a couple of recurring distinguished situations: idea gathering from the crowd and single-issue consultations. In both cases, the basic pattern is articulated in terms of the involved social actors (citizens, public institutions,  system administrators) and of the commitment they take and fulfil.