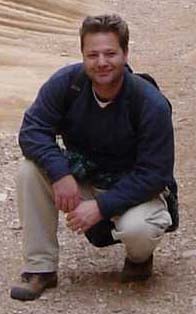 Human and Robot Exploration on Mars or Moon
This event took place on Tuesday 09 November 2004 at 14:15

With the recent exciting events of NASA?s Mars Exploration Rovers and President Bush?s announcement for NASA to return to the Moon as a stepping stone for going to Mars with humans and robots, the debate about why we should send humans to do the scientific exploration on extra-terrestrial planetary surfaces is again upfront and central. Can robots explore? Are the MER rovers really geologists on Mars, or is geology still performed by the scientists on Earth? What would it mean for humans to explore Mars? How would robots and humans work together? How will the astronaut geologist collaborate with his or her colleagues on Earth? These are but some of the questions that are now going to be seriously considered at NASA.

At NASA Ames, in particular in the Work Systems Design & Evaluation group, we have been asking these questions for more than five years. We have studied today?s geology scientists in the field in order to understand what they do and why they do things the way they do. We have studied them on Devon Island in the High Arctic, and in the dessert in Utah. We have also done detailed studies of the work processes for the Apollo missions, the only time humans were actually on an extra-terrestrial surface. Based on these ethnographic field studies, we are developing human-centered software systems that support the astronaut geologist in living and working on Mars, collaborating with remote scientists back on Earth and working together with robots in the field.

In this talk I will give an overview of some of the issues concerning human and robot exploration and will present our work on the Mobile Agents Project during this year?s (April-May 2004) two-week field test at the Mars Dessert Research Station, located in the Utah desert near Hanksville, Utah. For this year?s field test we collaborated with both researchers from KMi at the Open University and the ECS group at the University of Southampton.

Screen movies of the UK/US Remote Science Team:
How the RST Facilitator at the OU helped the RST by publishing a Portal Map with only the key information needed (26 mins):
Making_a_Compendium_RST_PortalMap.mov (29.3Mb)Quick introduction to the tools that the RST is about to use in an online meeting (45 secs):
Pre-RST-meeting-tool-check.mov (2.5Mb)Navigating around the Meeting Replay tool (1min 49secs):
NASA-MeetingReplay.mov (3.6Mb)(The above movies have large dimensions and maybe difficult to view on small screens)