Institute of Education, University of London 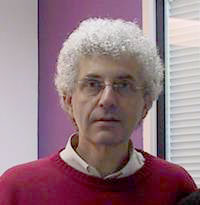 'Designing learnable mathematics: lessons from the WEBLABS project'
This event took place on Tuesday 14 February 2006 at 11:00

In this seminar, I will discuss the design and implementation of computer-based systems aimed at transforming mathematical learning.

Drawing on findings of the recently-completed EU project, WebLabs, I will discuss how such systems can extend what it is possible for students to express, how they might reshape the kinds of mathematical knowledge students hold, and transform the possibilities for who could (and should) know what - and when.

Richard Noss is Professor of Mathematics Education at the Institute of Education. His overarching research interest is in trying to understand what kinds of knowledge people really need in the 'knowledge economies' of the twenty-first century, and in building tools that help them acquire that knowledge. Over the last ten years he has worked with bank employees, nurses, airline pilots and engineers, among others, trying to describe their professional and mathematical knowledge. He has also engaged them in 'playful' learning experiences, including (most ambitiously) teaching the programming language Logo (often mistakenly described as a 'language for kids') to a group of investment bank employees. At the other end of the age scale, the recently-completed Playground project has involved very young kids in designing and building video-games.

Richard is co-director of the London Knowledge Lab, and was until recently editor-in-chief of the International Journal of Computers for Mathematical Learning, which aims to realise the vision of its chair, Seymour Papert, to 'foster a new, creative and more learnable mathematics with digital technologies'.)